With improvements to the smart lever lock design based on user feedback and internal R&D, installation is now faster and easier with the ULTRALOQ Latch 5 – especially with the built-in WiFi functionality, which removes the need for a WiFi adaptor or bridging device. Enhancements to the device's WiFi technology allows it to sync instantly with the U-tec app, offering improved connectivity as well as faster and more stable remote access. 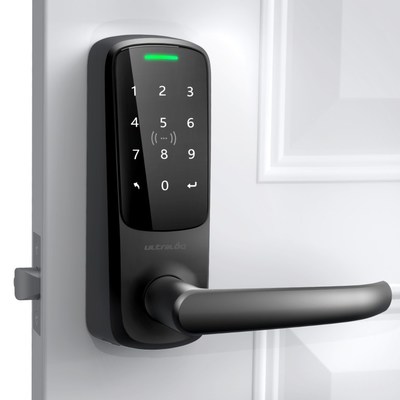 The ULTRALOQ Latch 5 series supports Amazon Alexa, Google Assistant, Samsung SmartThings, and IFTTT. It is also compatible with Android and Apple smartphones as well as the Apple Watch through the U-tec app.

The ULTRALOQ Latch 5's Fingerprint edition also upgrades existing ULTRALOQ fingerprint technology using an optical sensor to the newer, faster, and more secure capacitive sensor technology. Each registered user to the device can store unique fingerprints. With the NFC edition, users can open doors touch-free with the wave of a key fob or an NFC-enabled smartphone.

The ULTRALOQ Latch 5 series is a versatile choice that is suitable for a diverse range of outdoor, indoor, home or public scenarios – from patios and entryways to business environments such as offices, conference rooms, and function rooms.

On both the Fingerprint and NFC models, temporary access can be granted to short-term guests – such as visitors, babysitters, delivery personnel, or even house/apartment rental tenants such as Airbnb guests – who only need to use the entry point for a short period of time.

ULTRALOQ is deeply thankful for the support from its loyal customers over the years and credits them for elevating the smart lever lock to high standards that meet consumer expectations. To celebrate the launch of the ULTRALOQ Latch 5 series, 200 of ULTRALOQ's very first batch of crowdfunders have been gifted the new smart lever lock to thank them for their support.

For inquiries or corrections to Press Releases, please reach out to Cision.
✕
× Close Ad