Gov. Phil Scott on Friday said outdoor retail business in Vermont ,such as garden stores and greenhouses, can begin to serve in-person custoimers under certain guidelines.

Scott said the businesses must welcome customers in outdoor spaces, and there can be be no more that 10 people, including customers and staff, in the area at a time.

The new guidelines also allow landscapers and outdoor construction crews to work with small crews of five or less employees. The rules also apply to work performed in unoccupied structures. Scott also said manufacturing and distribution operations can open with a maximum of five employees, as long as they remain six feet apart.

“The best way to take small steps forward, is to make sure we put health and safety first,” he said. “All of us, employers, employees, and customers must take this responsibility seriously.”

Scott sais that, despite the new guidelines, it’s not the time to declare victory over the viruis, which has killed more than 40 people and infected more than 850.

“With the fewest number of cases and loss of life, it will also result in a less severe economic impact in the long run” said Scott.

“We have had about 7,000 businesses successfully get authorized and have funds available of about $1 billion,” he said. “Yet many Vermont businesses were not, didn’t quite make it before funds ran dry.”

Welch said the federal government has to continue its efforts and make adjustments to the regulations according to real-world situations.

The World Health Organization says if a state’s confirmed positive cases are under ten percent, it’s on the path to containing the virus. Commissioner of the Vermont Department of Financial Regulation, Michael Pieciak, says Vermont is meeting that threshold.

“Here in Vermont we have been consistently under that ten percent thresh hold for over a week. Again, while maintaining consistent testing,” he said.

Pieciak also presented data that shows Vermont’s positive cases are now doubling at a rate of every 37 days. Vermont’s trends are better than what was predicted to be the best-case forecast. According to Pieciak, Vermont has an adequate supply of PPE, hospital beds and ventilators. 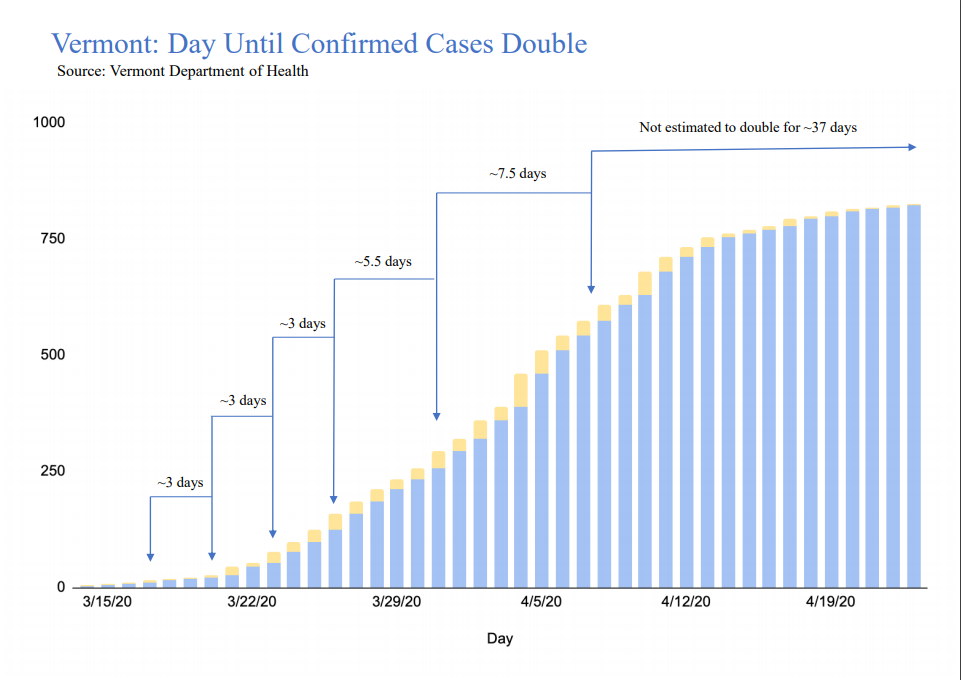 NASA astronauts Doug Hurley and Bob Behnken reported that the capsule was performing beautifully, as they closed in for the docking. The gleaming white capsule was easily visible from the station, its nose cone open exposing its docking hook, as the two spacecraft zoomed a few miles apart above the Atlantic, then Africa, then Asia.

RICHMOND, Va. (AP) — Protesters demonstrating against the death of George Floyd, a handcuffed black man who pleaded for air as a white police officer pressed his knee on his neck, targeted Confederate monuments in multiple cities.

As tense protests swelled across the country Saturday into Sunday morning, monuments in Virginia, the Carolinas and Mississippi were defaced. The presence of Confederate monuments across the South — and elsewhere in the United States — has been challenged for years, and some of the monuments targeted were already under consideration for removal.

‘We’re sick of it’: Anger over police killings shatters US

MINNEAPOLIS (AP) — Americans awoke Sunday to charred and glass-strewn streets in dozens of cities after another night of unrest fueled by rage over the mistreatment of African Americans at the hands of police, who responded to the violence with tear gas and rubber bullets.

Tens of thousands marched peacefully through streets to protest the death of George Floyd, a black man who died Monday after a white Minneapolis police officer pressed his knee on his neck until he stopped breathing. But many demonstrations sank into chaos as night fell: Cars and businesses were torched. The words “I can’t breathe” were spray-painted all over buildings. A fire in a trash bin burned near the gatesof the White House.